It was with much anticipation and excitement that the winner of the “People’s Choice Award” for our first RPCS ARCHIES was announced in Assembly this week. Jaden was voted as the most popular portrait for his representation of our School Chaplain, Trent. His traditional portrait was commented on by many as truly realistic and creating a pensive mood. 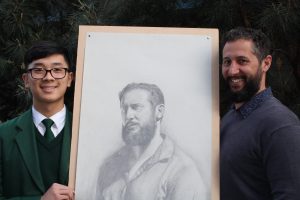 Discussing his work Jaden said: “As the school chaplain, Trent is commonly known as a casual, easy-to-relate to guy. This aspect of him is why he is so effective in his ministry. I have depicted a more serious side of him and his significant position in the school. I wanted to create a middle- ground between what is known of him and what may be perceived. Trent’s gaze allows the audience to ponder his thoughts, whilst the intricate application of graphite on his beard and hair characterises the man as strong and powerful. A person who has dedicated his life and career to ministry.”

A member of the community who was so delighted by the sense of community spirit that the exhibition brought, offered a generous donation in the form of a gift voucher for art supplies for the winner of the People’s Choice. Not to be outdone, our Principal also offered a prize for his choice and so a second category was created. James was voted by our Principal to be the recipient of the “Principal’s Choice Award” for his beautiful rendition of maths teacher: Mr Toefoki. 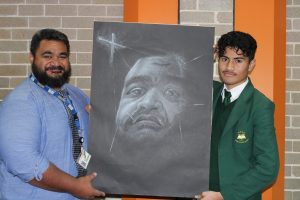 Talking to James about his artwork he said: “In an interview, Mr Toefoki stated that in his life, God is always first before anything and he expressed the importance of his faith. I’ve tried to implement this theme of Christianity though the white  cross. The cross is contrasted from the dark background and acts as a light source that lights his life. I decided to show Mr Toefoki being stitched together by the cross as it is building him up as a person.”

Throughout this exhibition and unit of work the students have really developed their ability to capture the essence of the person and in doing so have honoured the staff member. The community has strongly supported the exhibition and all the students who participated felt deeply encouraged by the positive comments in the voting process. As their teacher, I am truly proud of each and every student in the class who sought to learn and master new techniques and overcome their fears and self-doubt to produce inspiring artworks that strengthened a sense of community in our school.

Good, Filling Nutrition is Important Throughout The School …

Does Your Child Know How to Ask For Help?  As you prepare your …

Prepare for School With the Right Uniform Here are our top …

Children love playtime because it’s fun. But did you know that …

You get your child in the car and ask, “What did you do today?” …