On 12 August, a group of junior boys from Regents Park Christian School went to the CSSA Basketball Gala day at the Bankstown Basketball Stadium to compete against other Christian schools around the state. Our first game was against Oran Park Christian School. It was a tough game but we came out on top 28-14. Our second game was against the Inaburra B team. Heading into this game we felt very confident and the score at the end was a comprehensive 32-5 RPCS win. We then played Mount Annan in our third game. We were down by a point at the end of the first half but we played better in the second to come back and win 21-12. Our first defeat was from Shire Christian School. It was a sad defeat with some questionable calls, and a few injuries but the boys were eager to get ready for their semi-final. The final score for that game was a 25-22 Shire win. Our last and final game was against Inaburra A team in the semi-finals. We tried our best but Inaburra A came out on top to go in the Finals of the CSSA basketball tournament against William Carey. The result for the Inaburra A vs Regents Park was a 29-19 Inaburra win.

Junior girls from our school competed in a Basketball Gala Day at Bankstown Sports Stadium against different Christian schools in the area. Some schools we had competed against were Sutherland Shire Christian School, William Carey, Inaburra A and B, and Oran Park. Both teams, junior boys and girls, had come 3rd in the competition and made it to the semi-finals, unfortunately not making it to the finals. It was a great day and good opportunity representing our school in sport. 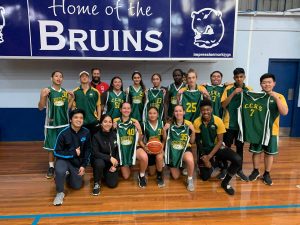 On Monday August 26th, our school participated in the CSSA Open’s Basketball Gala Day. The gala day saw over 20 different teams come together at Bankstown Basketball Stadium. Our school competed in both the girls and boys division. Although losing their first game, the boys put their heads up winning both their last 2 games, unfortunately, it wasn’t enough to make the semi-finals. The day saw some great 3 pointers from Micah, Mackenzie, Isaiah and Josh; with some heavy defence from Paula, Noah, Seop and Isaiah.

The girls, on the other hand, put up a strong fight winning all their games making it straight to the Grand final against longstanding premiers Inaburra Christian School. At half time there was no leading team with our school only down by 2, as the game came to an end Inaburra had a number of consecutive shots putting them in the lead and winning the grand final. Great support from the boys who were cheering them on from the sideline. Well done to the girls Jasmine, Shanikau, Daniella, Amariah, Evanleigh, Janine, Christina and Debra.

Thanks to Mrs Koulyras for organising the day and to Trent and Miss Eskander for coaching us.

Rebekah Lee: ARTEXPRESS 2022 As we celebrate the results of a …